Entrepreneur Theo Kracke is at the center of an emotional debate over short-term vacation rentals in Santa Barbara, one that could deliver a significant financial blow to his business.

So he’s putting up a fight against the City of Santa Barbara, which has banned short-term rentals in most residential areas of town. Kracke sued the city, alleging it was violating the California Coastal Act, and then the city fired back, calling for Kracke’s suit to be thrown out of court.

See the full article at PacBizTimes.com or in the March 3-9, 2017 edition of the Pacific Coast Business Times. 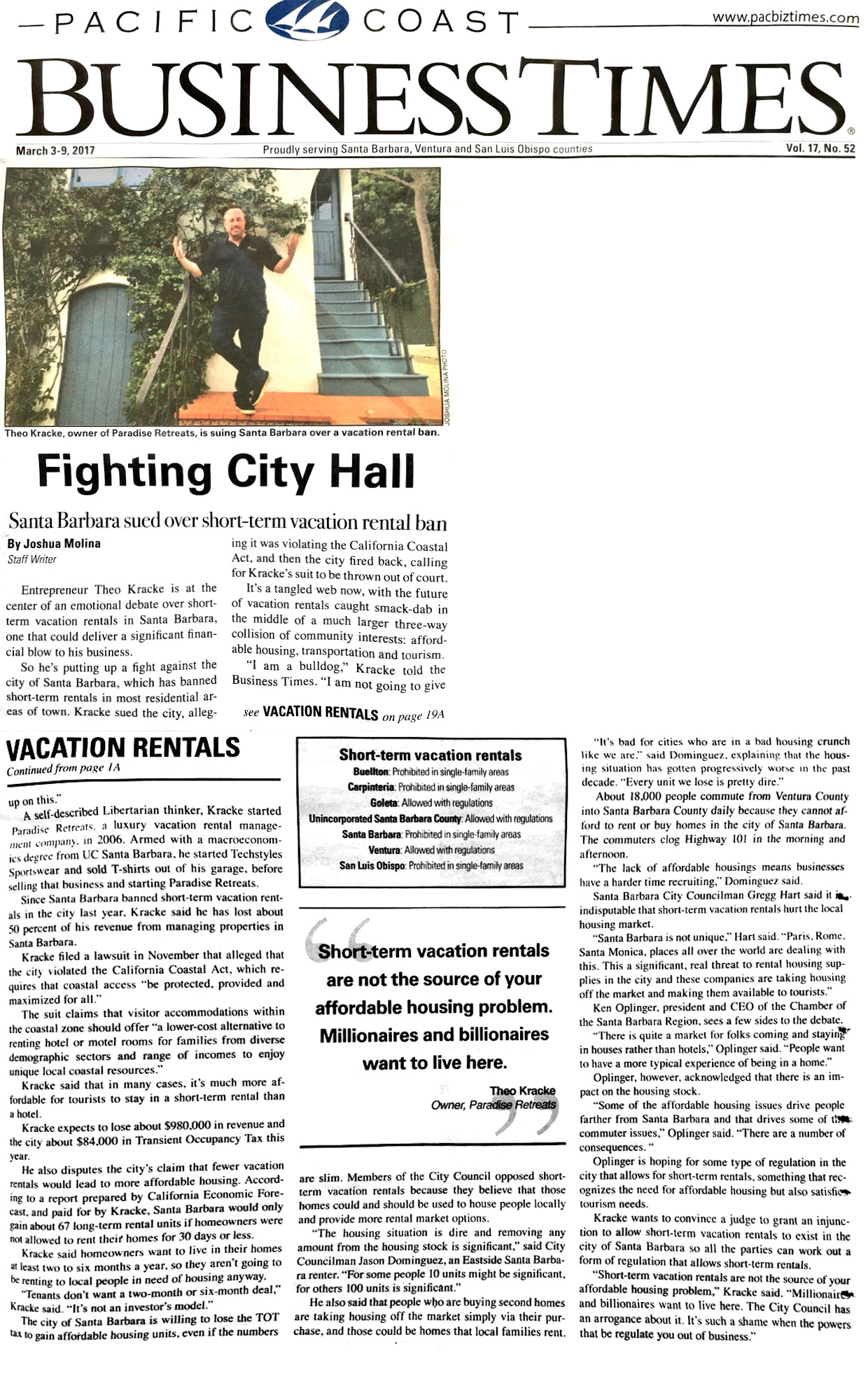 The City of Santa Barbara’s escalating crackdown on short-term vacation rentals has experienced plenty of expected backlash, the latest of which claims in court that the city’s position violates California’s formidable Coastal Act, a 40-year-old law designed to balance development pressures along the coast with conservation efforts and public access. The lawsuit — filed this week by Theo Kracke, owner of Paradise Retreats, which manages 27 short-term rentals within city limits — is buoyed by state law requiring relatively affordable overnight lodging along the coast. According to the suit, “[Short-term vacation rentals] serve as a lower cost alternative to renting hotel or motel rooms for families and small groups from diverse demographic sectors and incomes to enjoy coastal access.”

See the full article at Independent.com.

This editorial originally appeared in the Santa Barbara News-Press in October 2016.

We expect our government officials to make balanced decisions in the best public interest, based on actual evidence, not opinions or guesses. Unfortunately, that is not what is happening in the County and City of Santa Barbara in the case of Short Term Rentals (STRs).

Since last year, STRs have been targeted as a significant cause of both our shortage of affordable housing, and the degradation of the quality of our residential neighborhoods.

Let me start with some actual facts.

(NOTE: all of these facts can be confirmed by reading the reports located at www.STRSantaBarbara.org/Reports):

Short Term Rentals represent about 1.7% of the entire housing market in Santa Barbara City and County (there are approximately 2,550 STRs out of 147,368 total housing units).1

STRs are a major source of revenue for the City and County of Santa Barbara, generating about $470 million in overall economic activity, and creating about 5,000 jobs.2

STRs provide property owners with a way to generate income to help support the affordability of their home, while also having the ability to enjoy the home throughout the year.

In spite of these benefits, the SB County Planning Commissioners recently recommended that short term rentals be banned in most of the County. This recommendation, when combined with the current enforcement actions approved by the City of Santa Barbara, will devastate this sector of our economy, and will cost many people their jobs.

To add facts to a conversation where opinions and guesses have led the discussion, a respected local consulting firm recently conducted two academic analyses of those allegations:

The first report, The Effect of Short Term Rentals on the Supply of Housing in Santa Barbara City & County, concludes that STRs affect about 1/10th of 1% of the long-term rental housing supply, and are not a significant cause of the shortage of affordable housing. Why? First, the quantity of STRs as a percentage of total housing is very low (about 1.7%). Second, 85% of STRs are used throughout the year by the owner, so they would never be available as long-term rentals. Finally, the median STR home value in Santa Barbara is over $2m, and about 50% of STRs would rent for over $5,000 per month as a long-term rental. These costs disqualify most STRs as housing that could ever be considered “affordable”.1

The second report, The Effect of Short Term Rentals on Neighborhood Nuisance Complaints Along the Central Coast concludes that nuisance report rates for STRs are slightly less (to substantially less depending on the City) than nuisance report rates for all residential properties. Readily available data was collected from San Luis Obispo to Thousand Oaks, and the conclusions of this report are logical and irrefutable.3

The win-win solution is not to prohibit short-term rentals, but rather to regulate them (as both Goleta and Ventura have done).

Save The Rentals Santa Barbara (www.STRSantaBarbara.org) is a group of over 850 supporters committed to the idea that well-managed and well-regulated STRs can be a benefit to our community. We have created an outline that presents the overriding principles that will allow STRs to co-exist within current bylaws and zoning. Please take a minute to understand that there is a balanced solution to this issue by reading our proposal titled A Plan for Fair Regulation of STRs in Santa Barbara.4

As partners who share a passion for the benefits of short term rentals (and who also understand the concerns of neighborhood compatibility & housing supply), we look forward to working with the County & City of Santa Barbara to create a regulatory framework that works in the public interest, and gives certainty to this important part of our local economy.

(Theo Kracke is the leader of Save The Rentals Santa Barbara, an advocacy group promoting the Fair Regulation of Short Term Rentals in Santa Barbara City & County)

1. The Effect of Short Term Rentals on the Supply of Housing in Santa Barbara City & County (www.STRSantaBarbara.org/reports)

3. The Effect of Short Term Rentals on Neighborhood Nuisance Complaints Along the Central Coast (www.STRSantaBarbara.org/reports)

4. A Plan for Fair Regulation of STRs in Santa Barbara (www.STRSantaBarbara.org/reports)

The interaction between short-term rentals and the availability of affordable housing units has been a focus of housing policy discussions across the United States. The fundamental question asked in these discussions is: “If short-term rental platforms like Airbnb did not exist, would the owners of those units instead rent those units to long-term renters at affordable rates? If so, how many units are actually lost to short-term rentals?” In Portland, several studies have explored this relationship. To add its data to the discussion, Airbnb asked ECONorthwest to analyze the most current Airbnb entire home listings to provide data and interpretation of the interaction between these listings and housing affordability in the City.

The results of the analysis show that Airbnb’s activities in Portland have minimal, if any, impact on the current affordability crisis.

Click below to view and/or save the full report in PDF format.