Court Rules Against City in Demurrer to Vacation Rental Lawsuit

Theo Kracke won a battle in his ongoing lawsuit against the City of Santa Barbara over its decision to ban short-term vacation rentals (STVRs). Earlier this year, the City filed its second demurrer (this is the third time that the City has attempted to get this lawsuit dismissed). However, on June 26, 2017, the court overruled the demurrer and made certain findings that validate the core arguments of the lawsuit. Now that this major obstacle to the lawsuit has been removed, it will proceed in court.

According to Mr. Kracke, “We are thankful for the court’s thoughtful and well-reasoned decision. This is a victory for those people who could not otherwise enjoy the Santa Barbara coastline. This case is far from won, but the court’s decision is a big step in that direction.”

In the decision, the court ruled Mr. Kracke’s allegations constitute “development” under the Coastal Act since the decision to ban STVRs resulted in a change in the density or intensity of use of land or of access to the coastline.  According to the court:

The allegations establish that the City intended to [change the density or intensity of use of land or of access to the coastline]. The legislature has decided that the provisions of the Coastal Act are to be construed liberally to accomplish its purposes and objectives.  Interpreting the definition of ‘development’ as the court has here complies with that mandate.  The fundamental purposes of the Coastal Act are protecting California’s coastline and ensuring state policies prevail over local concerns. Requiring the City to obtain a CDP before implementing a prohibition on residential areas of Santa Barbara’s coastline is in harmony with both.

The City argued that its actions do not constitute a “development” under the Coastal Act since the City Council’s decision on June 23, 2015, was to enforce then-existing laws.  Disagreeing with the City, the court found:

[T]he City acted with a clear, and indeed stated, intent to ‘prohibit’ STVRs within the city’s residential areas, including the Coastal Zone. The allegations describe an identifiable choice between two existing yet conflicting policies — to allow and tax STVRs or prohibit them. The City Council chose to prohibit them as a deliberative body after public hearings.

In addition, the court ruled that Mr. Kracke’s causes of action for civil fines under the Coastal Act and declaratory and injunctive relief may proceed. The City must file a response to the lawsuit within 20 days.

Kracke’s lawsuit challenges the City’s ban on STVRs, alleging that the City’s actions are illegal and in contravention to various policies set forth in the Coastal Act.  Central among these policies are the requirements that the general public must have affordable accommodations within and access to the Coastal Zone.  In implementing its ban against STVRs, the City violated these policies and failed to apply for a Coastal Development Permit (CDP) to ensure that its actions conformed to the Coastal Act and its own Local Coastal Plan.

This decision follows another setback for the City, when in February, the court ruled against the City’s anti-SLAPP motion which argued Mr. Kracke’s lawsuit was an unlawful attempt to chill the City’s first amendment right to free speech.

In a separate ruling, the court denied Mr. Kracke’s request for a preliminary injunction (which would have stopped the City’s current enforcement efforts until the lawsuit was completed).

A lawsuit against Santa Barbara’s ban on short-term rentals can proceed, according to a ruling in Ventura County Superior Court.

At the same time, a motion by the city to strike the challenge by vacation-rental business owner Theo Kracke under a statute aimed at quashing malicious lawsuits was denied.

See the full article at Newspress.com or in the Tuesday, March 14, 2017 edition of the Santa Barbara News-Press. 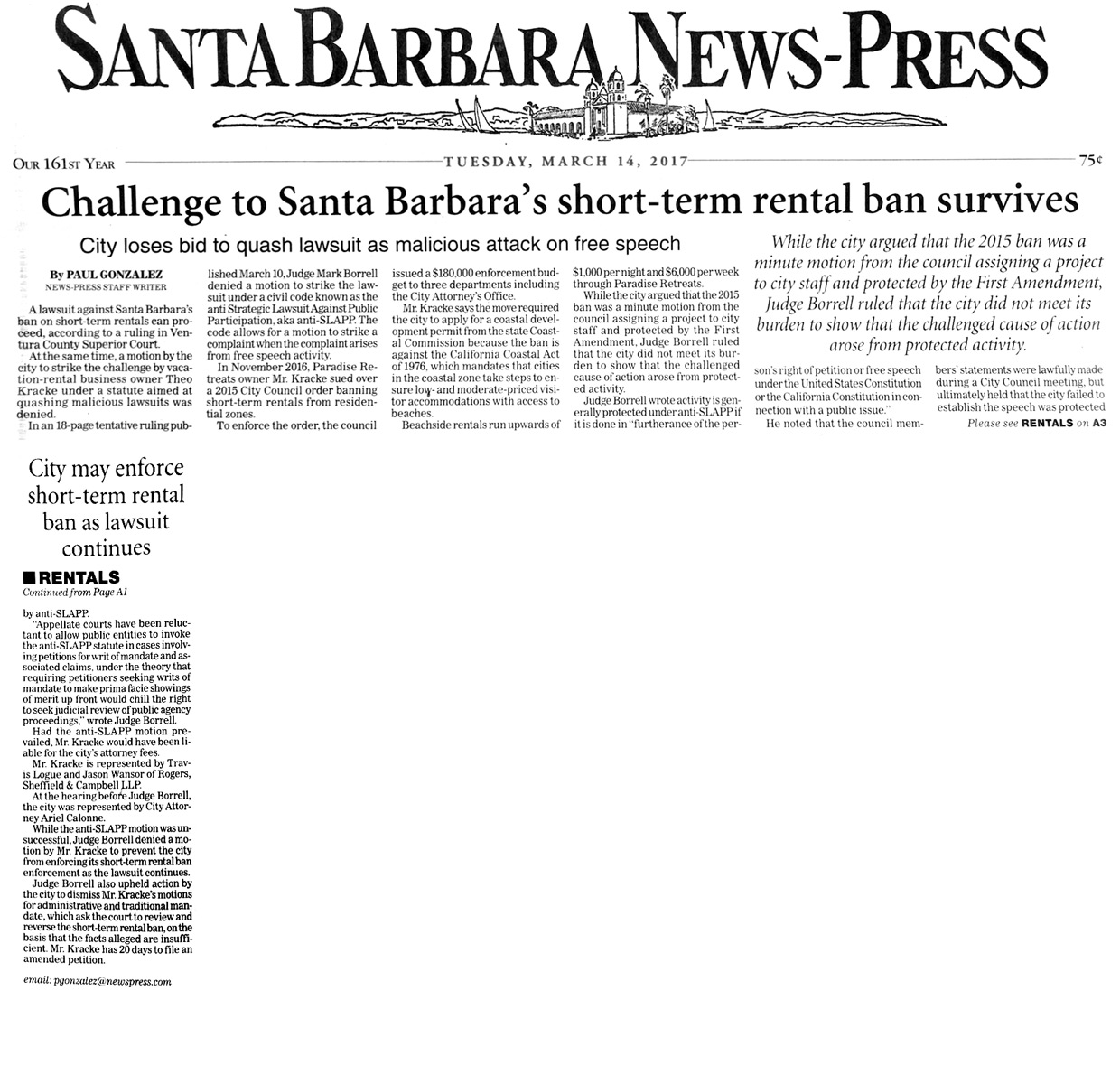